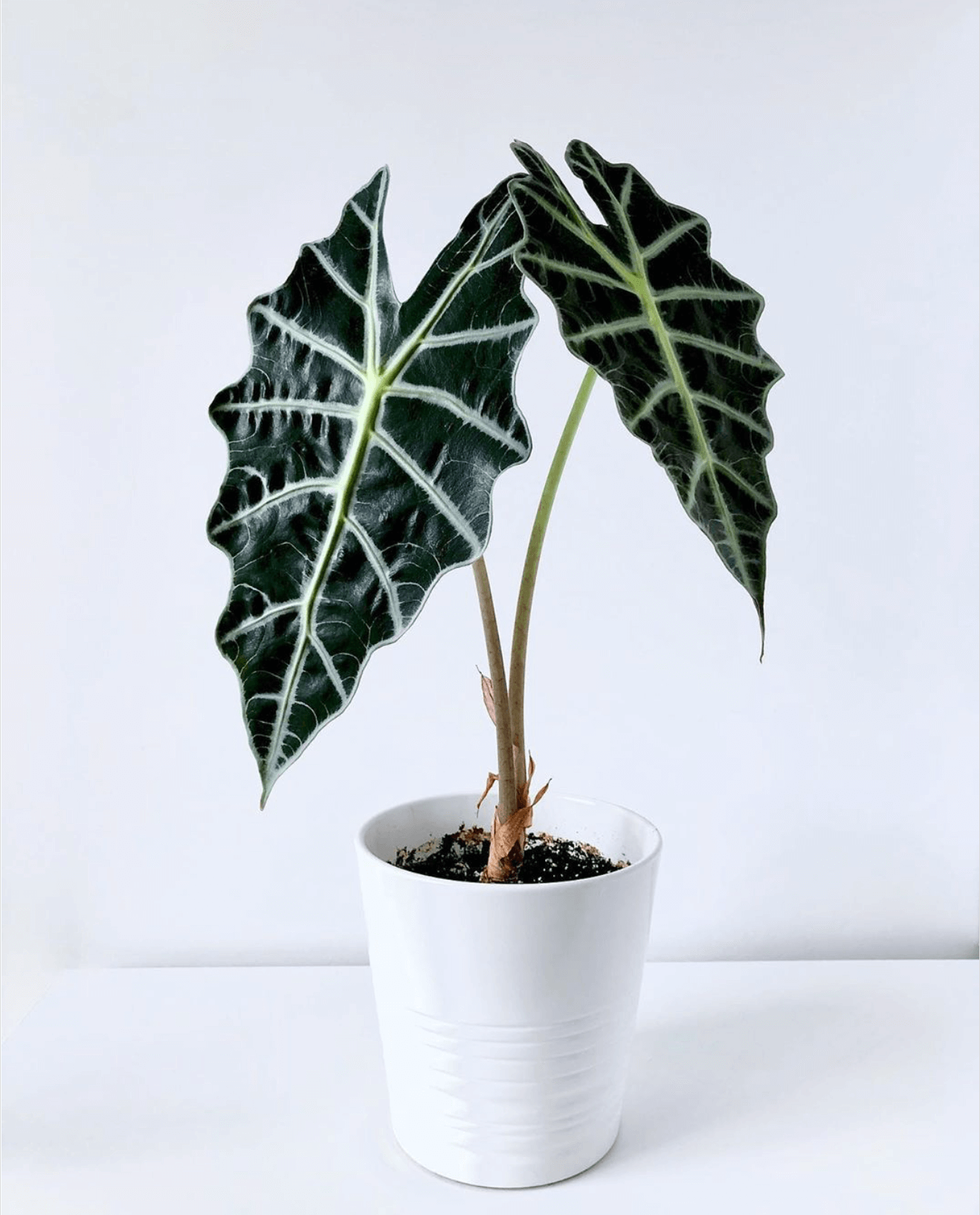 13 Feb Plant of the Month

Alocasia, more commonly referred to as Elephant Ears, is a large family of plants which thrive in our wet, humid and hot summers. These are Rhizomal plants, which clump and multiply after winter each year.

This species is an Amazonica variety – most easily identified by its almost black leaf with white veins. Alocasia grow naturally in rainforests with moist, compost rich soils. They love their water in summer and can grow incredibly fast at this time of year. Amazonica is a more compact form, perfect for containers or even indoor use.

Large green leaf forms like Odorata, Macrorrhiza, Wentii and Brisbanensis can be grown indoors, but do get big so are more often found in gardens. They perform best in well light, partial sun situations. Although it is possible to sun harden the larger green leaf forms, it is not their natural environment. Keep protected from frost and strong winds, and fertilise well during Spring, Summer and Autumn.

Kangaroo Paws are recognised the world over, both as a flowering plant, and as a cut flower. However, they are also recognised as difficult to grow successfully in the Subtropics.

Traditionally endemic to more southern and western Australian climates, Kangaroo Paws have had a lot of breeding and improvement over the years. Many of the early flower, compact varieties are short lived, however there are a small number of larger growing or ‘landscape’ Kangaroo Paws, which can thrive. Available in Scarlet, Gold, Tangerine and Federation Flame, these forms have been grown right here on the Sunshine Coast. They are later flowering and produce an abundance of flowers from late Spring all through Summer and Autumn.

Kangaroo Paws do best in a sunny position and enjoy a well draining soil. They do enjoy regular moisture while establishing to help create a deep root system. Fertilise using a native fertiliser after flowering at the end of summer and remove any spent flowers, to encourage more. Once the plant is established, they can be cut right down to ground level, if required, to allow for new foliage. These varieties are larger growing, with most producing flowers over 1m tall and the plant up to 50cm tall.

For a tough, drought hardy, Australian beauty, these can’t be overlooked

Hydrangea are considered one of the most recognisable plants around the world. They come in a range of colours, but predominately fall into groups of blue, white or pink.

These forms are native to Japan and will grow approx. 2m x 1.5m, when fully developed.

They require protection from our fierce summer sun and a well-drained soil. This makes them perfect pot specimens, or for a shaded spot in the garden. Hydrangea are deciduous, meaning they are dormant over the winter months. In fact, it is this dormancy which allows the plant to store energy, in order to produce flowers. They flower from October through to December.

Feed regularly through Spring, Summer and Autumn using a good quality, flower promoting fertiliser. Keep moist through summer, but allow to dry out over winter.

They respond well to pruning, after flowering, to promote a bushy growth.

The Encore range of Azalea represent a breakthrough in breeding and development of Rhododendron.

These plants are repeat flowering, more heat and drought tolerant, and show significant resistance to pest and disease. The range has many colours and sizes, with most showing compact growth around 1m tall.

These plants are suitable for container growing, or in gardens, and will repeat flower throughout Summer, Autumn and Spring.

Fertilise each season with a quality acidic fertiliser, suitable for Azalea, to ensure continued performance and prune well after flowering in Autumn. These plants can be grown in full sun to part shade and are a great way to get colour in a small space. With over 7 colours to choose from, there is an Encore Azalea to suit all styles. 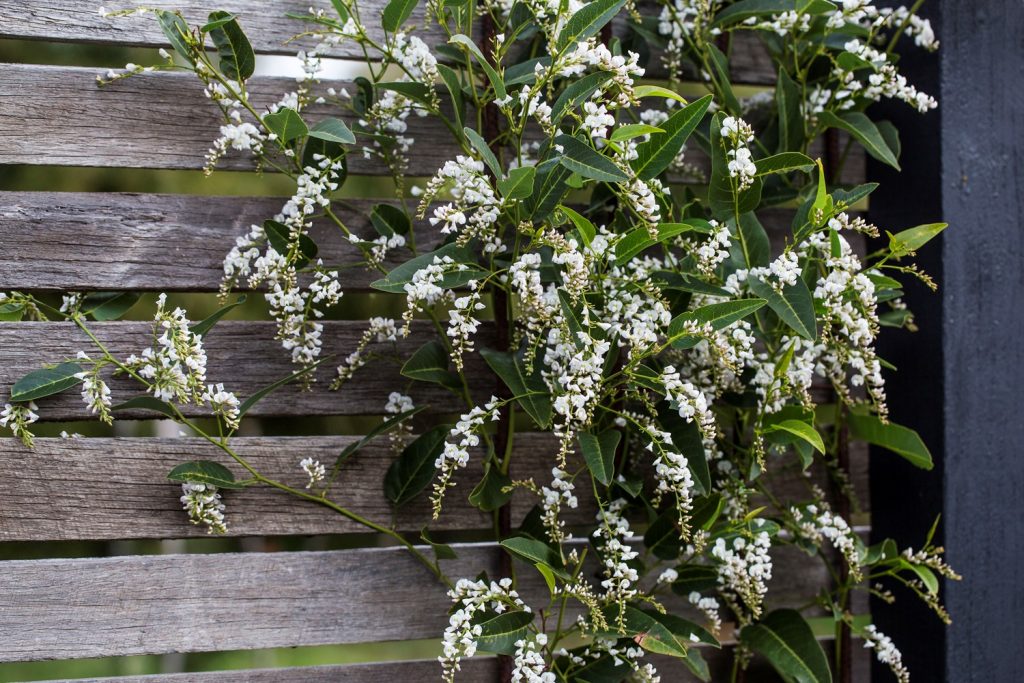 ‘White Out’ is easy to grow and will thrive in most conditions if the soil is well draining. Suitable in both ground and container gardening. Plants perform best in open full sun positions.

Fertilise with a controlled slow release fertiliser in spring and late summer. Regular pruning is recommended to maintain fresh vigorous growth, especially after flowering. The growth habit is shrub-like making ‘White Out’ ideal for use as a low spreading screen. It will quickly cover fences, trellises, archway and pergolas covering an area approx. 2.5m x 2.5m. 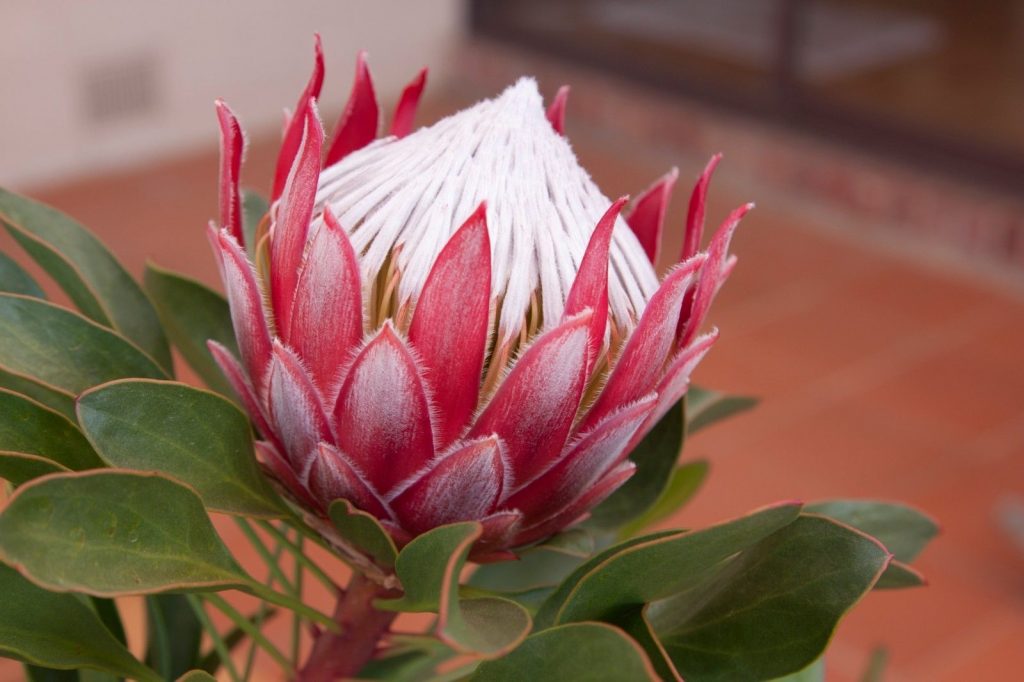 Protea are part of the Proteaceae family. Well known members of this family include Grevillea, Banksia and even Macadamia Nuts. Protea are a South African native, but along with their close relatives, Leucospermum and Leucodendron, these plants prosper in the same conditions as many of our native species. Protea are often grown for their cut flower properties, but also perform well as potted or garden specimens.

It is important to get the environment right for these plants to grow successfully. They require a very well-draining position, with no chance of water logging, or ‘wet feet’. They won’t tolerate heavy clay soils, but will perform well in a well-draining, native potting mix, if your garden isn’t suitable. They can be fertilised every 3-4 months using a slow release, native fertiliser, and should be trimmed after flowering in September/October. They are best grown in full sun and don’t like being smothered by other plants – so give them plenty of space. Water well to establish, but once they are settled, protea will tolerate extended periods of drought.

Little Prince is a more compact growing form, bred to produce the large flower types of the ‘king’ protea, but on a smaller growing plant. Little Prince will grow to 1m tall by approx. 1m wide. 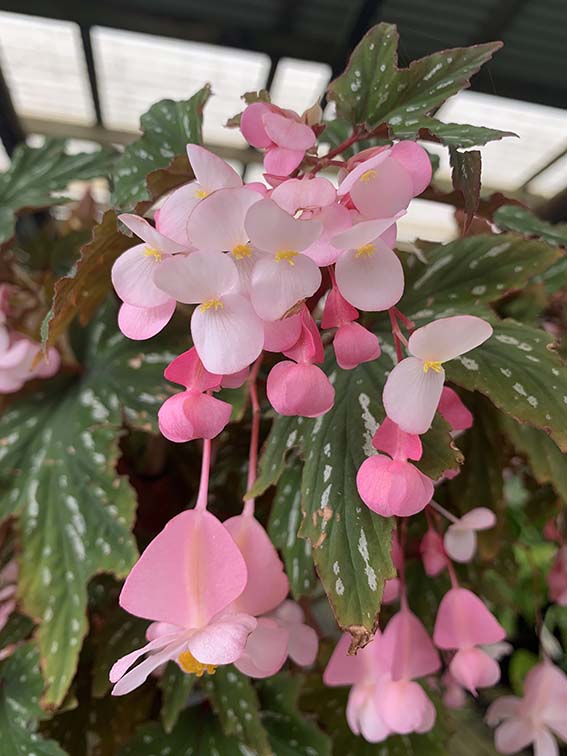 Begonia have long been a favourite in many gardens, and with hundreds of different recognised cultivars, there really is a begonia to fit most situations. Diadema is a hybrid, upright cane type begonia, producing an abundance of pink flowers. This variety will flower from March through to July and enjoys a warm, well light area, but not in direct sun. It is not a large grower, only reaching approx. 60-80cm in size, so perfect for a container or for inground growing. Like all begonia, it doesn’t like to have wet feet, so ensure plenty of drainage. Fertilise well with a slow releasing fertiliser in Spring, Summer and Autumn and trim well back in Spring to encourage new growth and potential new blooms. Begonia will flower indoors as long as they are kept in a well lit area. 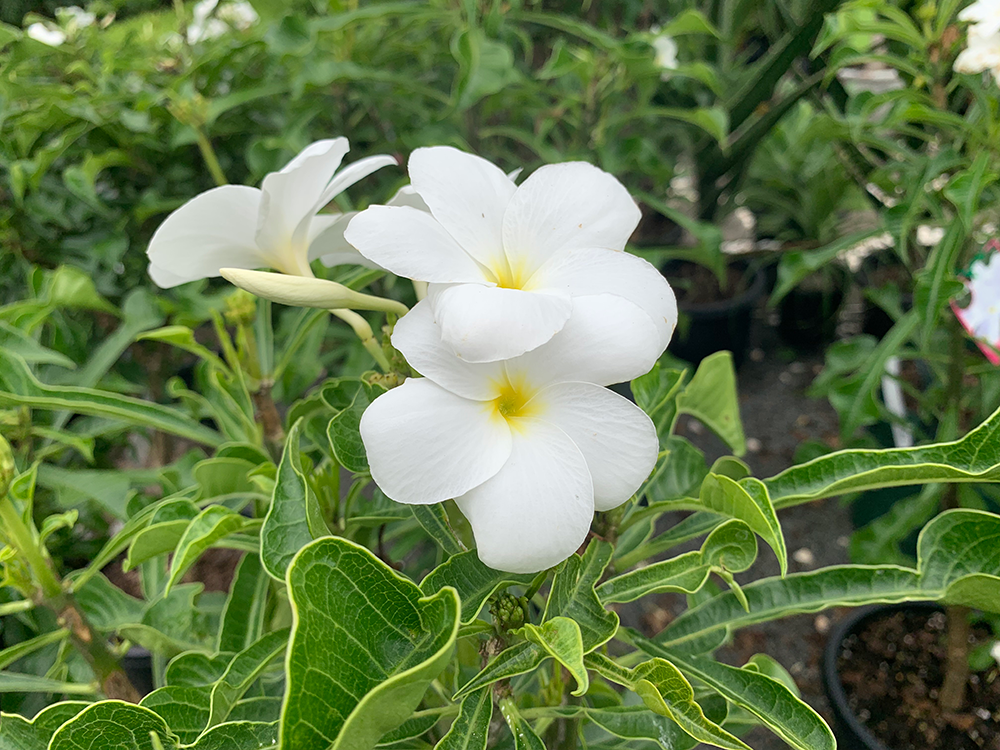 This variety of frangipani is fast becoming one of the most popular. It is almost evergreen in our climate, and produces an abundance of white flowers from late Spring through to the end of Autumn. It is a fast growing variety, reaching a total height of 3m if left untrimmed. It can be kept trimmed happily from 2m.  It has a lovely upright growth habit and performs more like a shrub, than a traditional tree. 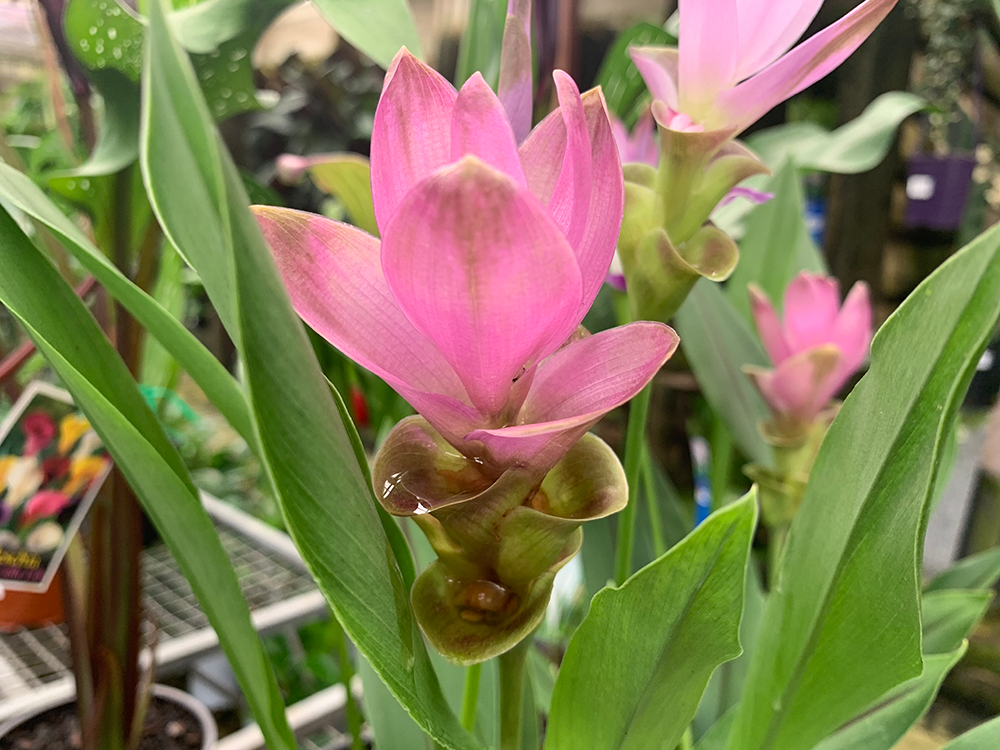 Sometimes referred to as the tulip of the tropics, Curcuma are an impressive flowering ornamental ginger. Aside from the edible crop of turmeric, most curcuma are grown as an ornamental, flowering garden plant.

Flowers range from red to pink to yellow and white. All varieties are deciduous so remember to allow for them to die back during winter – just remember where you plant them as they will flower up again the next season. Flowering in the warmer months from December through to March, these gingers are incredibly showy and can even be used as cut flower.

These plants do prefer part shade, as full sun tends to bleach the flowers and foliage. Fertilise well with a slow release fertiliser after flowering, before they begin to die down for winter. Once dormant, allow to remain dry until new shoots emerge.

They are very suitable to be kept in a pot or in the garden, and most varieties are well behaved – not developing a large root system or spreading out of control.